Deol Lawyers is a law firm providing legal representation and advice in civil litigation, including construction disputes, real estate litigation and taxpayer representation so as to resolve disputes with the Canada Revenue Agency, as well as assisting business owners with any litigation that they may be involved in. 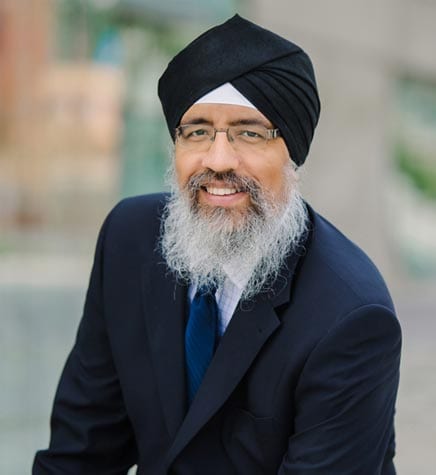 Rajdeep was born in Nairobi, Kenya, East Africa. He moved to England when he was 16.  He obtained his Bachelor of Law Degree from the London School of Economics & Political Science in 1989.

Rajdeep articled and subsequently worked with a London boutique firm (Memery Crystal) and worked on some significant commercial litigation cases as a litigation solicitor (one such case involved representing a former Soviet republic and travelling to Geneva, Switzerland for an arbitration).

Rajdeep moved to Vancouver in 1996 and redid his articles with Russell & DuMoulin (now Fasken) in downtown Vancouver.  Having been called to the bar in 1998, Rajdeep became an associate with Fasken. Rajdeep worked on complex commercial litigation matters while he was at Fasken.

In 2003, Rajdeep decided to move his practice to Surrey in order to better serve members of our community who needed advice in Punjabi, as well as, owners of businesses in and around Surrey.

Rajdeep’s main areas of practice are real estate, commercial and construction litigation and taxpayer representation so as to resolve disputes with the Canadian Revenue Agency.  He has experience at Provincial, Supreme Court and Court of Appeal levels.

Rajdeep enjoys pretending to play golf, occasionally defeating his nephews at video games and volunteering his time for religious organizations.

Contact us today for a FREE initial consultation and we can discuss with you the best approach to your specific case.

Skip back to main navigation